I’ve been hearing that October is coming for weeks now. Someone has been very excited and has been making plans for decorating our house for Halloween. He would probably start in September, but he knows I like to wait until the beginning of the month to begin celebrating any given holiday. He was well prepared and kept asking me when we could go up into the attic to get down the Halloween boxes and when we could go to the Spirit Halloween store.  He knew that this weekend was THE weekend and he had a plan. 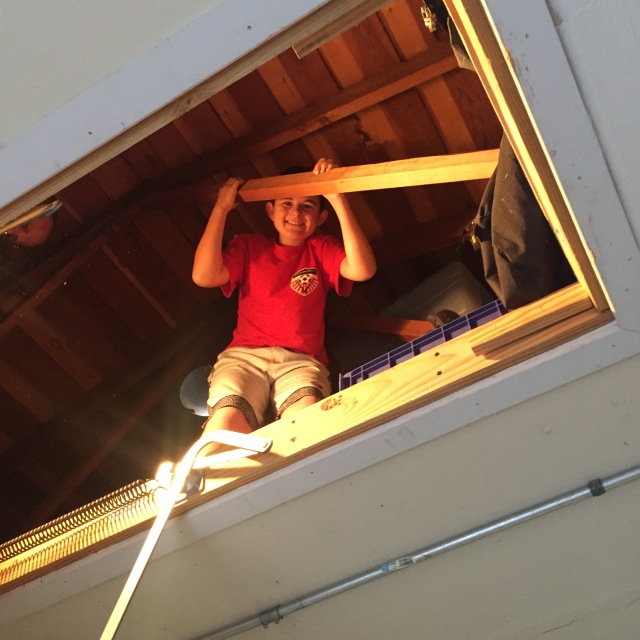 I told him that we could go into the attic in the morning, after we had our coffee. Of course, as soon as his eyes had opened, he was asking if we had had our coffee yet. Have I told you that someone in our family is quite determined and a little planner?

Luckily he waited for us, however he couldn’t sit still and kept tapping the stick that pulls down the attic door. He was so excited that he was bouncing off the walls.

When we finally got up from the table and Jeff was ready to open the attic, he was asking if he could go up in the attic too. Jeff had the typical dad answer, which was “no,” until Charlie worked his magic. He informed us that he could do it now and that he was no longer 5.  He was now big and wanted to explore and to see what was up there and he had us convinced.  I loved watching him carefully climb up the ladder and grow up in that moment. He definitely is no longer 5 and I could literally see him growing up, right there. And the smile on his face showed all his success.

My no longer five year old, still loves the holidays and for this I am thankful. I received joy by watching him love the experience, tearing open the boxes once again with wonder and decorating our home.

I love that he is growing up before my eyes and that he still is my little boy.

Happy Fall, everyone!  I hope you enjoy October.