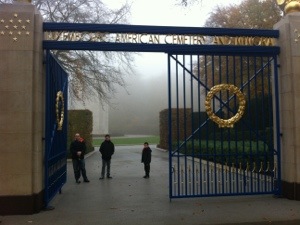 Today I am thankful for my husband and his passion for military history and geography and for sharing his passion with our family. I am thankful that he knows his way around and wanted to take us to see where General Patton was buried. 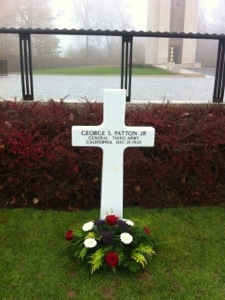 In two days it will be Veteran’s Day and every year he takes the kids to a veteran’s cemetery or memorial so that we can be reminded of the sacrifice that was made for our freedom, and to honor his Granddad who served in WWII and survived.

Every time we go, I get teary eyed and feel so emotional for the men (and women) who have fought in war and for their families and loved ones, who have also sacrificed. Today was no different.

It was a foggy and misty day and seeing the cemetery in this light and with this ambience had an even bigger impact.

We imagined the soldiers fighting in and around Luxembourg with weather conditions worse than ours. It was quiet and peaceful and eerie. We also visited the German cemetery and noticed quite a few differences. Charlie and I made a few observations:

1. There were Crosses and the Star of David marking different burial sites, but there were several more crosses than stars. 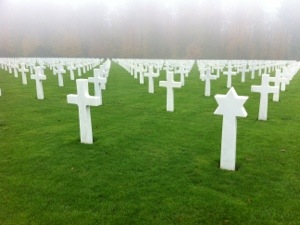 2. The Jewish tombstones had little stones on top. These are a custom to show that a family member had visited.
3. The names of the men came from several different states.

4. One man died on Christmas Day.
5. There were names that represented several different nationalities.
6. The American cemetery was perfectly groomed and balanced and neat. The German cemetery was not well maintained and had a dreary and dark feel to it, even though it was still beautiful and quiet.

8. A few of the tombs had beautiful bouquets. 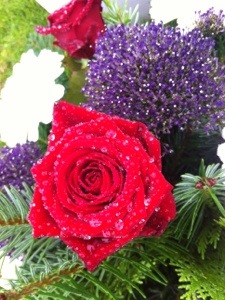 9. General Patton’s tomb was at the head of the cemetery, almost like he was looking over all his men. It was in such an appropriate place.

10. The American flag was flying and church bells rang out. I felt at home and was surprisingly so happy to see and hear colors and sounds from home.

Thank you to all the people who do good everyday, who choose the harder right, and create peace and love in their homes, in their community, in the military and wherever they go.

One thought on “Day 108: Luxembourg American Cemetery and Memorial”